Warts are growths that sometimes show their ugly heads on your skin.

Though there are a number of different types of warts that can appear on your hands, your feet, or other areas, they are often unsightly, which is why most individuals prefer to have them removed.

There are home remedies like this one using apple cider vinegar to remove the wart overtime, but the most effective way to get rid of a wart is an over the counter wart remover.

What Type of Over the Counter Wart Removers Are There?

There are basically two types of over the counter wart removers that you can use for treatments. The first is the use of salicylic acid, which can be available in a topical gel, a liquid, or a patch. This type of treatment breaks down the proteins that are in the affected skin, which will cause the wart to dissolve over time.

You can also use liquid nitrogen as a way to remove warts as well. It can be used to freeze the wart that you want to remove, and after a few applications, it will all off.

Benefits of the Best Over the Counter Wart Remover

Also, using an over the counter option also means that you will not need to reveal your wart to your physician, which can be embarrassing for some.

Downsides of Over the Counter Wart Removers

Unfortunately, not all of the over the counter treatments work well enough to remove warts, and if something goes wrong at home, it could be a much more involved process to correct it. If your skin is broken at any time during the removal process, an infection could result if you are not careful.

Warts that we want to remove are not always on ourselves; in fact, they often can be on our family members, our children, and even our pets. The first product that we are going to review is an over the counter wart remover that is designed specifically with dogs in mind, but there is a variation that is designed for you to use as well. Both products have the same natural ingredients because they are designed to do the same thing: remove the wart.

This is a liquid treatment that is made from 100 percent plant extract, and it should be applied to the area three to four times a day. It is actually suggested that you run an emery board across the wart before applying the treatment so that it can penetrate the skin better. Within two to six weeks, the wart should be completely gone.

The next product on our list that we are going to review is one that is designed to help you get rid of plantar warts. Each box comes with 24 small medicated discs that you place directly on the wart as well as 24 cushioning pads that you place on top of the disc to keep it in place and make the treatment more comfortable.

This is a treatment that utilizes salicylic acid, which means that it may be too intense for someone with sensitive skin, but for most, it will gently remove your wart in a few days. In fact, a 48-hour treatment may be sufficient for some, while it may require up to 12 weeks for more difficult warts.

The next over the counter wart remover that we are going to consider is the Compound W Freeze Off Wart Remover. It is designed to do just as the name implies, which is freeze off the wart that you want to be removed, and it can be done in as little as one treatment. If your wart seems to be resisting treatment, there are eight doses in the packaging so that you can ensure that the entire wart is removed.

This wart remover comes with an applicator that is shaped like a cotton swab so that you can place the medication precisely where it needs to be to take care of the wart. The process is painless, which is why the manufacturer has said that this wart remover is safe to use on children who are over four years of age.

If you do not like the idea of freezing your warts off of your skin, Compound W also has an over the counter wart remover that comes in a gel form. The key ingredient in the gel is salicylic acid, which can be quite effective for removing warts. Before applying the gel, you should soak the wart so that the medication can penetrate the wart more easily.

This treatment is designed to remove the wart that you are trying to get rid of quickly, but also in a way that is not going to harm you.

The gel should be applied up to two times a day, and it could take up to 12 weeks for the topical ointment to completely remove the wart. The gel comes with a precision tip that makes it easy to apply the gel to your wart instead of the skin surrounding it.

One of the simplest things to do is put on a bandage, so when you need to remove a wart, this over the counter solution from Compound W is essentially a bandage with medication on the pad.

This is a wart remover that is designed to use salicylic acid to remove the wart while covering it at the same time; no additional cover is needed for this wart remover. When you order this product, you will get a total of 14 pads in the packaging.

You should apply a new pad every 48 hours so that you can ensure that the salicylic acid is working to remove the wart as quickly as possible. In addition, this self-adhesive pad also has a waterproof design, which means that you can take a shower without ruining the pad that you currently are using. 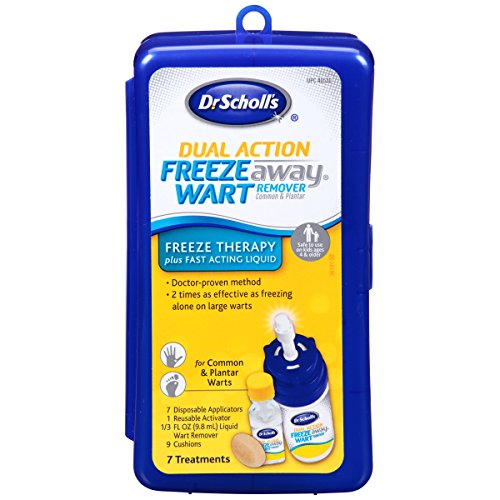 The Dr. Scholl’s Dual Action Freeze Away Treatment is a great over the counter wart remover that you can try for plantar warts as well as other common types of warts. This product is a treatment process that combines freezer therapy with a liquid treatment to ensure that the wart is removed from the root and it never returns.

Once you freeze the wart, you should wait for a period of about 24 hours until you apply the liquid treatment.

This liquid should be applied twice a day for a period of two weeks. If the wart is still present after the two weeks are complete, start it again. There are seven treatments included in one package, but it often only requires one treatment to remove the wart completely.

Since not all over the counter wart removers work the way that we want them to on the first treatment, Compound W created a wart remover that is basically a combination of two treatments. First, you will freeze the wart so that the top layer becomes damaged, and your body will begin to reject the wart.

After 24 hours have passed, you can apply the liquid medication one or two times a day so that the salicylic acid can do its job.

This is an over the counter wart remover that is all natural, which means that there are no chemicals in the solution. This is a gel that is designed to fully remove a small wart in seven to 10 days; however, a larger wart may take a little bit more time. It can be applied up to three times a day to help the gel penetrate the wart more quickly.

This gel contains frankincense, which has an antiseptic property that is ideal for the removal of the wart. It also contains apple cider vinegar to help destroy the wart and boost your immune system as well as lemon to break down and dry up the wart so that it falls off. Apply the gel to your wart with a cotton ball or a cotton swab, and then cover it with a bandage. 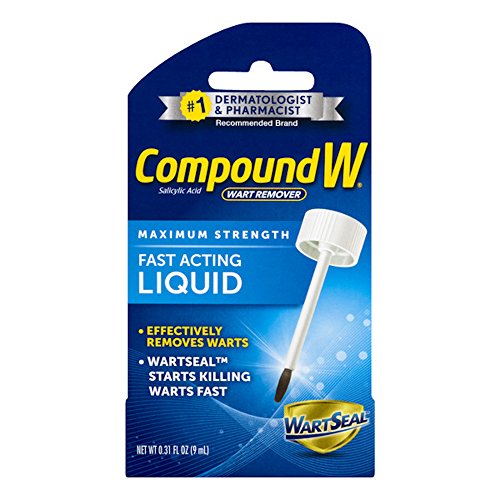 The next over the counter wart remover that we are going to look at in this guide is the Compound W Fast Acting Wart Remover, which is a liquid treatment that is designed to be able to remove any wart, whether it is large or small.

It comes with a convenient brush applicator that makes it easy to simply brush the solution onto the wart without getting on the surrounding area.

Once you have the liquid treatment applied, you will want to cover it with a bandage so that the salicylic acid stays where it needs to be to remove the wart. This liquid should be applied twice a day for a period of 12 weeks or until the wart is no longer on your body. 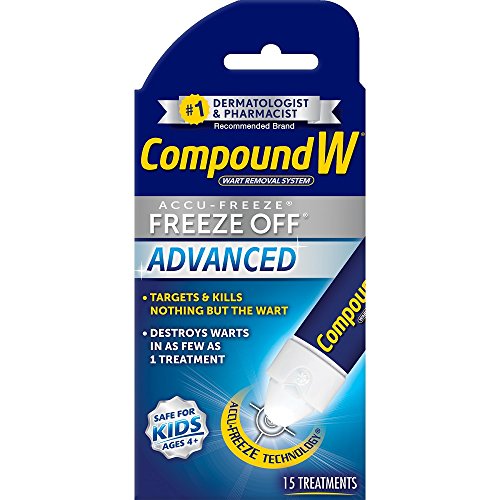 The final product that we are going to look at is another Compound W over the counter wart remover, but this time it is an advanced freezing treatment that is designed to work in as little as one treatment.

The packaging does come with 15 treatments though in case you need to use more than one treatment or you have another wart that you’d like to remove. This treatment works on most common warts, so whether you have a plantar wart or a small wart on your hand, you can use this over the counter wart remover.

You may want to soak the area with the wart before attempting to freeze it and make sure that you leave the applicator on the wart for the recommended amount of time so that it can freeze the entire wart, roots and all.

Editors Choice of Best Over the Counter Wart Remover

If you have a wart on your body that you want to remove, then the first thing to try is an over the counter wart remover. We have reviewed quite a few great options for removing warts in this guide, but if we were to select on to be our editor’s choice, it would be the Compound W Advanced Wart Removal System.

It is a safe and effective option that can freeze the wart off in as little as one treatment. For more beauty or health related reviews you might enjoy or would like to consider, click here. These drills will get you the perfect nails you’re looking for!