One thing is for certain: robots are becoming increasingly important to our day-to-day lives.

From the Roomba to the robots that work in our factories, we’re beginning to see them much more often than just 10 years ago, and now there’s a wide array of toy robots hitting the market that can help you or your kids get used to the new robot-centric world that’s on the horizon.

What Type of Robot Toys Are There?

There are so many different models of toy robot on the market today that it boggles the imagination. Different toys vary based on form factor, intelligence, and control scheme.

For example, you can purchase a humanoid robot that will amble around your home on two legs, and while this type may seem the most human, you may find that a model that uses wheels to get around is much more responsive.

Additionally, the day-to-day functionality is a area where robots can vary greatly; some robot toys will follow you around, some can be pre-programmed to explore set paths, and others can even communicate with you verbally.

In any situation, there are almost too many types of robot toys on the market to count, so it may take a little due diligence to find the product for your needs.

Benefits of the Best Robot Toys

The best products of this type are perfect for kids because some of these products can do things like play educational games, walk with your child, or even help engage their minds.

Many of these devices can even be controlled via smartphone, which adds a lot of convenience due to the fact that most people have an iOS or Android device on them anyway.

Additionally, these products work well as toys, so your child will easily be able to incorporate their new robotic companion into their make-believe adventures. As a result of children growing up with this new crop of toys, they will be that much more adjusted to the future where robots will become even more ubiquitous.

One of the primary issues with these types of toys is the fact that they use up a lot of battery power. The world of batteries hasn’t progressed much since the 1970s, which means that powering your toys can be problematic.

Some of these robot toys only have a battery life of only an hour or so. While an hour’s worth of playtime may not seem problematic, some users may feel that they spend more time charging their robot than playing with it.

The slogan of the Evo App-Connected coding robot is “Hack Creativity,” and this robot toy helps youngsters become more tech savvy as they play. In fact, Evo is designed to teach children coding, which is a valuable skill in our increasingly computer-assisted society.

The robot itself is pocket-sized so that youngsters can take their pre-programmed friends with them wherever they go. To make the product easier to use, most of the programming and robot settings can be managed directly through an iOS or Android-powered smartphone.

Evo is loaded with programmable LED lights, has Bluetooth functionality, and has proximity and optical sensors so that it doesn’t get damaged during a play session.

Star Wars fans can rejoice because the iconic droid is now available as a robot toy. This replica of R2-D2 is based on the designs from Sphero, which is the company that helped develop the toy designs for BB-8 droid from Star Wars: The Force Awakens.

With R2, you can completely control your droid’s movements via an iOS or Android application.

Not only does R2 have the iconic sounds that have made the little droid famous, but the robot toy also has the LED lights that have been unique to the robot for more than 40 years.

Everybody loves a robotic version of man’s best friend, which is why the Chocolate CHiP robot is such a popular option.

CHiP fully simulates the experience of owning a dog; when you wear the included SmartBand, which is like a watch, you can command CHiP to do several unique doggy tricks like follow, heel, and sit.

Additionally, for more trick-based fun, you can use the SmartBall to command CHiP to fetch; you can even upgrade CHiP’s features by upgrading the app via your iOS or Android device.

When CHiP’s battery gets tuckered out, CHiP will automatically return to his SmartBed and recharge for the night.

Having a bipedal robot can be a lot of fun and feels more human-like for children. This robot toy from Aosenma is a great option for anyone that wants a programmable toy for their children.

This robot has two distinct movement modes that are controllable via a remote unit: the bot can move side to side and can even speed walk.

In addition to this, with the press of a button, the robot will sing and dance, which can be very entertaining for younger children.

This is also an educational robot; it can be programmed to move in several ways; in fact, it can even record up to 50 actions so that your child is fully engaged and learning. 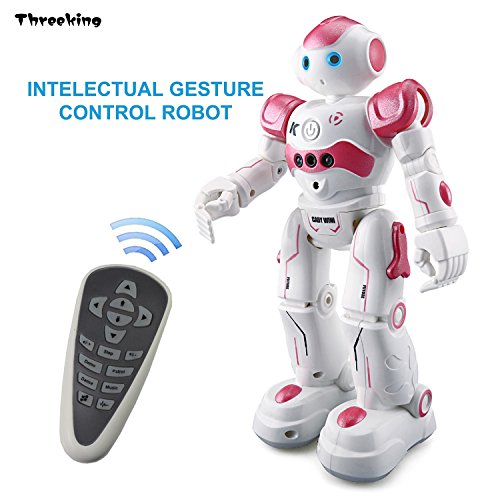 The next robotic entry in this guide is a product from Threeking. This smart robot has a lot of functionality that’ll let your child quickly learn and have fun. This robot has a unique feature that adds a lot of fun: gesture control.

This means that the robot has sensors on its body that’ll help it know when you’re beckoning it forward with your hands. This will let you control the robot without the included remote, which can be very convenient.

The robot moves via wheels at the bottom of its feet. Using this method, the robot’s movements are very realistic and there’s a high amount of stability and speed. The control unit that comes with this product also lets you program the robot to move in a wide variety of ways. 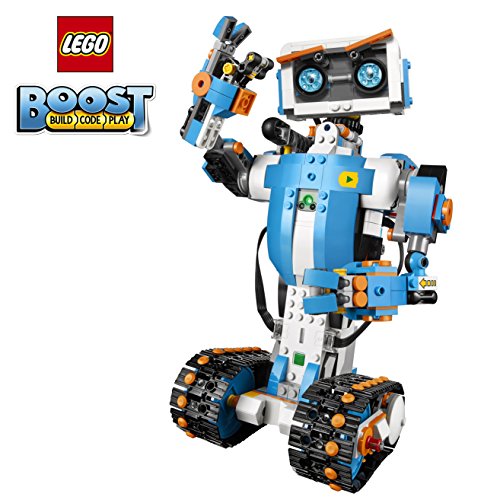 Lego has been popular for decades, and its Boost Creative Toolbox is an excellent and customizable robot toy kit that allows your child to learn a bit of coding during their play sessions.

This is a fully-functional robot toy that can be programmed via coding a smartphone or tablet. Outside of its primary robot form, this is still a Lego toy set, which means that your child can express his or her imagination and build a diverse selection of controllable toys.

In fact, this product has the ability to be formed into several unique designs that include an auto builder that has the capability of building smaller Lego models. 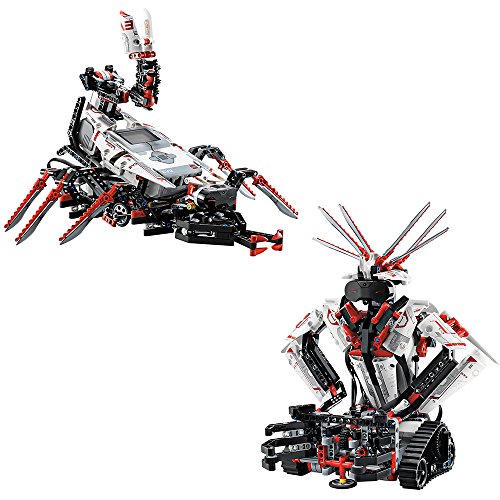 If you’re looking for an even more complex Lego option for your kids or yourself, then Mindstorms is definitely a great choice. Not only is this product programmable similarly to the Lego Boost series, but Mindstorms actually comes with a powerful ARM9 processor for more complex programmable behaviors.

This is definitely a more complex Lego Robot toy. In fact, the product has USB ports, is Wi-Fi compatible, and can access the internet.

The robot comes with directions for creating an additional four robot forms that include a scorpion-like creature, a dragon, a robotic vehicle, and a tank-bot. The robot is controllable via an infrared sensor system, and you can even have the robot follow you or another Mindstorms toy. 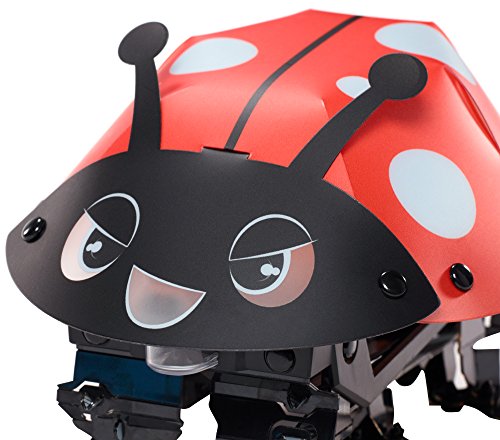 For those that prefer the competitive aspect of robot building, the Kamigami Lina robot is a great option. This is a fun-to-engineer product that lets your child customize their robot so that it can race, sumo fight, and battle the other Kamigami robots in their neighborhood.

The materials used in the Kamigami robots are all foldable so that it becomes a fun exercise for your children to assemble.

Kamigami is fully controllable via iOS and Android apps, and as time progresses, new tricks and behaviors will be downloadable. This version emulates a ladybug and has six legs that make it very fast to race. 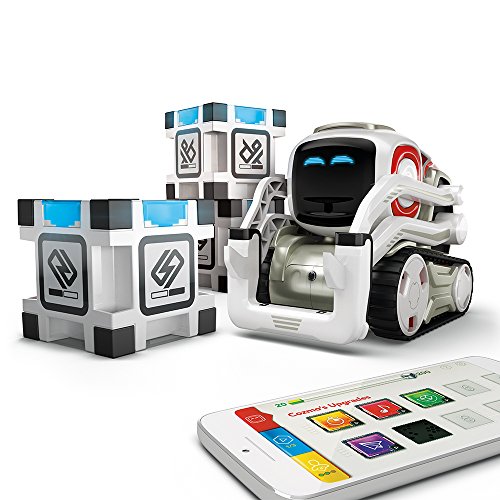 When you first see Cozmo, you’ll definitely be reminded of some of the famous movie robots like Wall-E. This is because Cozmo has a very personable face.

The robot has a frontal screen that presents two LED eyes that have the capability of displaying a lot of emotion. This makes Cozmo one of the most personable robots in this guide. In fact, the robot can express emotions like curiosity, cleverness, and even frustration.

Cozmo is also fairly smart; he knows how to avoid obstacles, won’t fall off of a ledge, and even has the ability to recognize his main user. In fact, Cozmo becomes increasingly interactive as he gets to know his master. 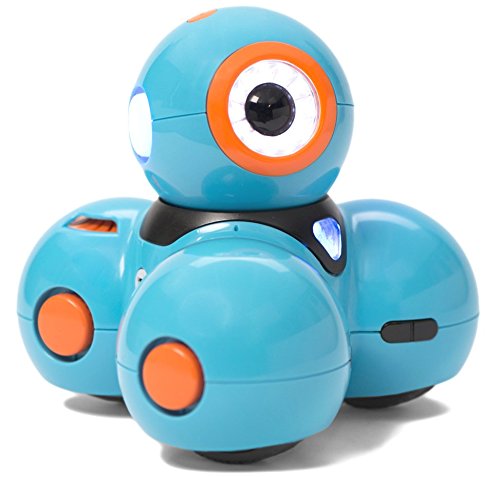 Dash is a coding-friendly robot that is the recipient of many awards. This quirky robot is fully programmable; it is compatible not just with iOS and Android but can be programmed on Kindle Fire as well.

Dash also has a very sturdy and stable physical design; it is based on three wheels that let it zip around the room without any chance of falling over.

When you don’t want to control Dash via the apps, the robot can respond to voice commands, which really sets it apart from many of the other robot toys on the market.

When your child is ready to code, Dash enters “quest mode,” which allows the robot to perform programmed tasks and complete user-defined quests.

All of the products that we’ve covered are cool robotic toys that any age can enjoy. That being said, we’ve selected the Wonder Workshop Dash Robot as our editor’s choice because this small robot has a lot of personality and is really easy to control. 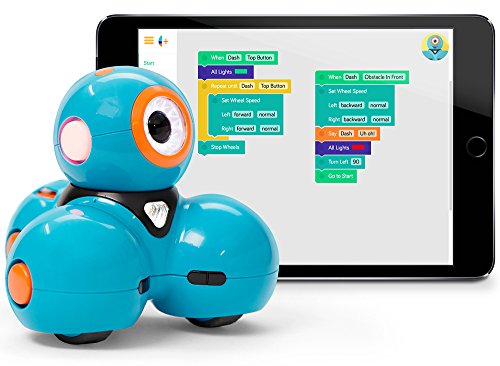 It’s also very convenient; it comes fully assembled and can be easily recharged between play sessions. If you want to have a look at another great toy click here to see the air hockey table. They’re fun for all ages!